The Seaholm Power Plant played host to psych, prog, indie and noise for three days, we were on hand for two of the three, picking out the best for the ATH faithful. The main stage centering the cavernous interior offered several interesting viewing angles due to the fenced off holes in the floor to the level below. Lighting throughout accentuated the scale of the interior and depth of the catacombs. Stage two was a smaller space set off to the side that remained at human body. Hit the jump for band summaries and pictures from the festival.

Zaza – Live, they use the three person formula that is becoming popular consisting of a synth/standing drummer, guitar and vocals thrown about. Check out the first two tracks of the Cameo EP for a sample of the best of this group and they have a free download at Zazasound.com of the dancier track “Distance Creator”.

Beach Fossils – At the time, I noted that though it was an early performance, this may end up being my favorite. Now, I saw some really cool stuff, but this prediction held up pretty well. Bedroom surf? Despite being early in the fest and still filtering in crowd, they played well, they played hard. “Daydream” was a standout track.

Night Beats – Back to the main stage, Night Beats was on. The lead vocal/guitar had a Bono circa Joshua Tree motif going, Dylan blues man. Three piece out of Seattle, big sound, perfect booking for the Fest. In review listening, I recall the track “H Bomb” being a favorite, manic guitar finish; myspace play stats confirm my sentiment.

Blue Angel Lounge – Also on stage two, was only able to grab one useable shot, packed house, weird lights, but these guys are promising. Check out their Myspace.

Atlas Sound – Sun has set, crowd is here. Bradford Cox starts setting things up on stage for the solo performance. He, an acoustic guitar and a set of samplers start their set early; we might get a little extra. Banging the neck of the guitar, he sets the beat. Tapping strings, he sets the melody. Beautifully layered and complex, he does it all with foot controls, taps and strums. I recall “Walkabout” and “Washington School” standing out. Things were stripped down and atmospheric, very good.

Crystal Stilts – Their frontman has an odd strange presence. Odd in that he is somewhat subdued but still engaging, Mick Jagger slowed to normal human pace. “Shake the Shackles” – find it in your collection or on a favorite website and play it at full volume. That still won’t sound anywhere near as cool as their performance made this song. Their self-titled tune was another favorite; it has grown up a bit with a few years of touring perfecting.

A Place to Bury Strangers – Long touted as New York’s loudest band, they delivered. The set was strong, frenetic and including instrument dropping in the first song. This was going to be serious. You can tell that instrument selection is based on durability; there are plenty of wounds all around. During the finale, an extra guitarist was brought on stage and it was so loud that I checked to see if my earplugs were still in. Oliver Ackerman throws his guitar, breaks all the strings, plugs his guitar lead into an amp and takes mics from the drum kit to increase feedback and noise. But it worked. Excessive, but it worked.

Omar A. Rodriguez-Lopez – Not a big Mars Volta fan, but there was plenty of the crowd ready to erupt. Everybody has gotten haircuts, Cedric is on stage. They get off strong, Omar playing conductor, Cedric doing his frontman thing. Crowd happy. Photogs kicked out. Good night.

You can of course see TONS more photos by Mr. Brian Gray on his website. 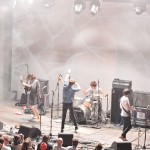