Kieran Hebden is a collector. A hunter-gather of sorts. With fine antiquities or rare stamps, the value of a collection is often determined by the finicky demand of the market. Hebden’s assemblage is a more specialized and unquantifiable archive; at least to the lay-person. Known lovingly as Four-Tet, the London-based producer collects music, or more specifically, samples. Little snippets of carefully curated melody or rythym. Like any artist, the real magic happens in the process and with an ever-growing presence in the electronic world, Four-Tet has managed to become a house-hold name with his ability to build stunning tracks from basically nothing but his snippits.

On Saturday night, he returned to the Capitol city with a new set of offerings on display. The market was indeed ripe.

Under cool, clear skies, the Mohawk was bustling with excitement prior to Floridian Anthony Naples stepping on stage with his trunkful of vinyl. From the first track Naples laid down, it was obvious that the crowd came to dance. The gangly DJ was all business, with his measured demeanor and stoic facial expressions, while his ‘e-cig’ bearing minions grooved and swayed to the heavy house-inspired bass lines. Good house music doesn’t often make its way through town these days, but Naples brought a style and substance which showed exactly why he’s such a promising new commodity in the scene. In a somewhat paradoxical setting, it was interesting to see the two DJ’s on a bill together. Hebden, who has made his living more or less entirely in a digital sense, paired with Naples, utilizing a truly analog approach. While Four Tet’s darkened eyes clearly show how often he digs into his digital archive to create his tracks, Naples simply disappeared from the stage behind his table briefly to rummage through his box of vinyl. Each in their own way are producing beats of the highest quality, and from the crowd’s perspective, it didn’t matter one bit how they were supplied.

After a short break, the frizzy-haired, mild-mannered Hebden stepped up to his table to great acknowledgment toting his infectious smile. Coming on the heels of 2013’s genre-defying Beautiful Rewind, Hebden carries a new-found status as one of the premiere beat-makers in a highly competitive and fast-paced niche market. Four Tet has found a way to carve out a place in the crux of Ambient, IDM, House, and Trance music while somehow finding a way to not step on the toes of any specific style. Here is a man who knows what he likes and he can craft it to suit his purposes at his slightest whim. Opening the set with ‘Your Body Feels’, the lone track from his latest on display, the crowd slowly warmed to the groove under the lingering swathes of ambient tones. Here is where Hebden separates himself from other producers in the game, save Caribou or the oft-compared Burial; pairing thoughtful, spectral rhythms with layered, pulsating base lines. Other gems in his bag of tricks included ‘Ocoras’ and ‘128 Harps’ and the pulsating ‘Pyramid’ from 2012’s Pink , while ‘Plastic People’ from his seminal There Is Love In You release, kept the ambience in full grasp. In each layered track, the audience beckoned for the bass to drop like a junkie in wanton need for their next fix. He was more than pleased to comply each time, but it was on his terms. In this specialized and effectual electronic field, there just wouldn’t be any other way.

After an inevitable encore to a near ideal set, he came back on to raucous support before launching into ‘Love Cry’, which nearly brought the audience to its knees with its immediacy, Hebden bobbing his head throughout. The most surprising moment of the evening for me was the time he spent after the set with each and every one of his adorning fans, taking more than a token moment to chat and take pictures, playfully in many cases once again showing his genuine smile. It’s obvious he loves his work and it seemed that he’s just happy that others enjoy it to the same degree. There’s no pressure for over-production or watering down. Simply put; Kieran Hebden is creating music in extremely personal terms, which is refreshing to see these days of self-aggrandizing musicians. We can all be hopefully that he never loses his spirit of discovery, curation, and ultimately, creation.

Photoguy Notes: SxSW preparation was in full swing. The Mohawk will have twelve moving lights for the conference and it sounds like they we will be sticking around. Awesome. Also, this was shot with my smallest camera as a SxSW test to be able to run light (Nikon V1 and two lenses). Schlepping ten pound of gear gets old. #photogproblems Naples and Hebden were kind enough to let me get a couple portraits. 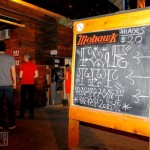